Book Review: How to Be a Heroine 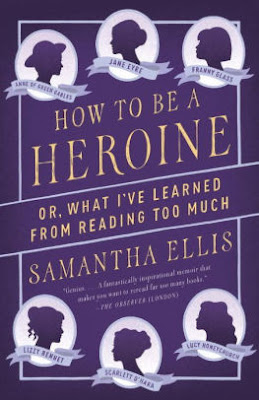 How to Be a Heroine by Samantha Ellis

I have a small but insistent affection for books about what books people read, and this one is about so many books that I've either read or want to read (and one or two I'm giving a big skip).  I won't go into the details of the books -- there's a full bibliography at the end of the book -- and instead tell you a bit about the idea of being a heroine.

In Ellis's life, what a heroine is changes, and because it's important to her to be one, she considers them from many angles.  It's not something that I've every really considered, at least not consciously.  At a fairly young age I discovered that most of the book characters (and TV and movie characters) I most admired were all male, which sort of denied the whole idea of a woman as hero for me.  It was some years before I found enough female literary heroines to think of them as a thing, and I never thought to model myself on them (I was busy trying to me Mr. Spock for too many years).  But I can sort of catch onto what she's saying, that we are the authors of our lives and the heroines of our own stories.

It sounds so pat and even trite, but in the context of the book, it isn't.  It's important and deep and a thought a lot of women (and men) don't really incorporate.

Above that, Ellis really examines these characters  -- Lizzy and Anne and Scarlett, Jane and Laura and so many more.  She digs into them within the fictional worlds they inhabit, and she digs into what their authors did with them or didn't do with them, what the authors were saying or not saying.  If you have a taste for literary analysis (in a lighter, less academic form), you'll find it here.

I now have to read and reread a number of books to see these heroines for myself.
at 4:25:00 PM No comments: 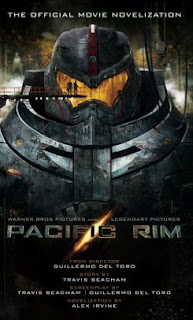 Reading has been a struggle for months, but (quite suddenly, it seems to me) I am back to reading again.  I suspect it might be a slight change in my meds, or the coming of spring, or a change in the planetary alignments.  I dunno, but I'm glad.

First book read was this one, because I love the movie and I tend to like novelizations when I want a non-thinking read.  This one satisfied.  It's pretty much spot on to the movie (a few minor variations which are to be expected), and it filled in some background.  It isn't exactly stellar writing, but I wasn't expecting to be blown away by the prose.  It was comfortable, familiar, and easy to read, which was just what I wanted.  I'm already on to the next book, which is a bit more challenging.

In other reading news, I'm mourning the end of a favorite series, The Iron Druid Chronicles by Kevin Hearne.  The last book arrived.  I'm not likely to read it, to tell the truth, because for me the series really ended 3 books back when I realized Hearne was sick of his character and the world he'd made and just wanted to get it over with.  The last few books have felt rushed and a little bitter.  I've heard a synopsis of the final book and I'm content with that.  I'd rather hang on to the positive feelings I have for the first 6 books and the short stories than to have it all sink into a bitter aftertaste.

I suspect that's a problem with a good series -- there comes a point where a smart author has to end it if there is a long running arc or an interconnected series of arcs.  As a writer, I know that when I already know the end of the story I'm writing, I tend to lose interest in it.  I write as much to tell myself a story as to tell it to anyone else.  There are series I've read where the author jumped the shark bigtime and couldn't go back to fix it.  Others, the author didn't realize when enough was enough.  But the hardest ones are when the author has gotten tired of what she's writing about and is eager to get on to some other project, but due to contractual obligations or just a completionist obsession has to write the thing out to a projected conclusion.  Those are the saddest endings.

That might also be one reason I haven't finished reading the whole Dresden Files series yet, because I fear that it will have that sad ending of a author who no longer loves his characters and just wants them to be done and over.  I think it's better when an author ends a series while she still loves her characters and still has a few stories left about them, but doesn't want to get sick of them.  Better to find a nice parking spot, move on for a while, and decide later if the whole thing is really done and better left alone, or if perhaps one or two more stories might be ready to appear in the world.
at 5:44:00 PM No comments: