About This "Seasons" Thing...

It's CHILLY today. The Weather Channel is predicting a freeze for tomorrow night.

What the HELL? It's still OCTOBER. What's this Freeze stuff? Freezes are for February.

The Husband climbed into the attic for our (small) supply of winter-type clothing. Originally I'd been thinking that most of my clothes would be fine with a sweater or a jacket. I'm rethinking that. I'm going to be packing up more summer stuff than I thought. I just don't see a lot of t-shirt and shorts weather coming up until maybe April.

However, I am well supplied with sweaters. I'm SO looking forward to wearing sweaters! Up to now, sweaters were something I needed because the A/C was set to Walt.* I have lots of sweaters. They are mostly Florida sweaters though.

Can you legitimately layer sweaters?

My feet have been cold for three days now. I keep reminding myself that it is only the end of October, as it has been JUST LIKE December/January in Florida all month -- the bright blue sky, the perfect, slightly cool temps. But it's rapidly not being like Florida. We've got a brisk north wind hitting us, and as our little townhouse is on the north end of our set, we are getting all that nice northness through the one window we have on that wall.

I bought a kitty heating pad for the cat platform on that window. It has been unoccupied perhaps 20% of the day. I can foresee needing another of those around here somewhere. The cats have decided this 'cold' thing is not popular with them. Not At All. Oh, and Caliban the New Kitty on the block has his own heater, but he is still in the garage/outdoors. More in the garage, as he's not big on this 'cold' thing either.

*Walt -- the temperature required to keep Walt Disney's frozen remains all Popsicely in the top of Cinderella's Castle.
at 5:38:00 PM No comments:

Yeah, I'm going to do NaNoWriMo again this year. Prepare yourself for a solid month of ranting, raving, whining, and occasional weirdness.
at 5:55:00 PM No comments:

It was for today. The Husband pointed this out last night.

The directions? From Yahoo Maps? Long way around. Thought I was lost. Took better way home.

The test? Maybe did ok. Math is an unremembered thing. I guessed a lot.

And the kitten? Gave me a horse bite today. I have bruises. And sympathy ice cream 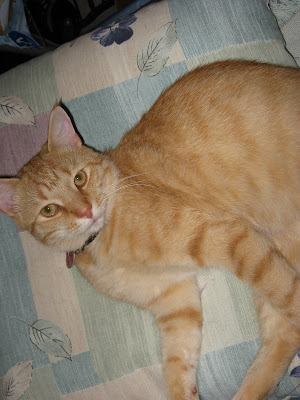 I've been holding out on all of you. Meet Caliban.

About two-three months ago, we became aware of a kitten hanging around the townhouses when a neighbor asked us for cat food for it. The ginger-orange tabby kitten got our housecats all excited. Being the big softy I am, I started feeding the creature, too, eventually getting him to permit us to pet him -- occasionally. We decided as responsible people we needed to see that he was neutered and health checked. Then we'd let him go.

He's living mostly in the garage (cleaned up for him) and he wanders outside in the day when he wants (he spends a surprising amount of time in the garage or on the drive by his own choice). He goes back and forth between affection slut and evil attacking demon cat. He's about 6-7 months old now, and I'm completely in love with him, even though he still has moments when he isn't sure about us. But he does come running when we step into the garage and he follows us around outside, so I guess he's really ok with us. He's taken over old toys the older cats don't care about, but we haven't staged a 'meeting' yet. They hiss at each other through the screens.

Ophelia is not doing well. We aren't sure why. I will take her to the vet if she doesn't show some signs of improvement shortly (she's been showing some small signs of getting better, but it's hard to tell with her. She's very lazy most of the time, and the diabetes is tricky when I can't test her bloodsugars myself). LaGuz has been peeing on everything, so we did more housecleaning -- she hates a messy house.

Everyone else is fine and sassy. I'm waiting to see what they do with actual cold weather.
at 2:44:00 PM No comments:

Email ThisBlogThis!Share to TwitterShare to FacebookShare to Pinterest
Labels: Cats

I am trying not to succumb to mind numbing panic.

The GRE test is Wednesday. I've studied about as much as I can in the time I had. Maybe I could have done more, but I was forgetting stuff almost as fast as I was reading it, so I think I struck the right balance.

I feel like I have a head full of saw dust and old Q-tips.

I am not going to panic. There's no point in panicking. If I don't score well on the test, I take it again later.

I have a warm kitty sleeping on my leg, the sun is shining, and the weather is cool. Life is good. Rinse, repeat.
at 2:33:00 PM No comments:

Email ThisBlogThis!Share to TwitterShare to FacebookShare to Pinterest
Labels: Life in General, The Next Big Thing

For the Benefit of Mr. JimK

The GRE study book says that the test often uses lesser known or secondary/tertiary definitions of words. I was surprised how well I did on the vocabulary tests (of 96 questions, I missed 3, and one was me being purely stupid). Then it gives a huge list of words to learn. Here are the ones I didn't know or wasn't certain I knew. Do you know what these words mean?

Not any stories to tell. Yesterday, I took the local "CAT" bus to campus for my class. It rained all day and I didn't realize my car umbrella had recently become a hanging-on-the-door umbrella. I got fairly damp. Nothing dramatic about the bus. It's free, and while it's a longer ride than if I drove to campus, it cuts the whole "there is no parking" problem neatly out of the equation. Plenty of parking near the bus stop.

The Mindfulness class is something to do. I'm not terribly interested in it. The main points are familiar to me, and the details are mostly reminders. Not a bad thing, but not revelationary.

I'm studying for the GRE. I am working on vocabulary today, and will attempt some of the math tonight. Since I'm applying for an English degree, I want to excel on that portion of the test. I just want to appear competent on the other half. They threaten word problems. I never did well on word problems.

I don't feel bad, just sort of undirected. My usual time wasters (aka the Interwebinet) are no longer so engaging, so I know I'm ready to DO SOMETHING. However, my concentration hasn't quite caught up to this yet. I need to vacuum. The floor is pretty nasty. Maybe that will be the high note of my day.
at 10:30:00 AM No comments:

Email ThisBlogThis!Share to TwitterShare to FacebookShare to Pinterest
Labels: Life in General Out of curiosity, I checked on Wikipedia, and realized that, for today's 18 year olds

have always been dead.

Email ThisBlogThis!Share to TwitterShare to FacebookShare to Pinterest
Labels: Cultchah

Are You What You Eat?

Scott, this one is for you.

I am signed up for the GRE test. I have just under three weeks to prepare. I have a study guide.

Today I Left the House

First -- my therapist is running a "Mindfulness" class. It's a reason to leave the house, so, heh, I'll give it a try. However, parking on the campus is nearly impossible -- there's a huge hill between the least populated parking lot and the building where the class is, so I may take the bus.

Second -- I talked to the director of the Masters in Professional Communication program today. If I take the GRE and get my application done by November 1, I will be applying for the program for Spring or possibly Summer. Of course, paying for it is a problem, since the assistantships are handed out only in the fall and most scholarships require at least one semester completed. Is this an idiot thing I'm doing? I can't help but think that I need to up my game if I want to find something besides a 'job' and maybe get into a 'career', but it may be well nigh impossible.

Not like I have had luck finding a job. I blame the President.