I've spent today sorting and moving books and putting together a single shelf with the books I hope to read in the coming year. 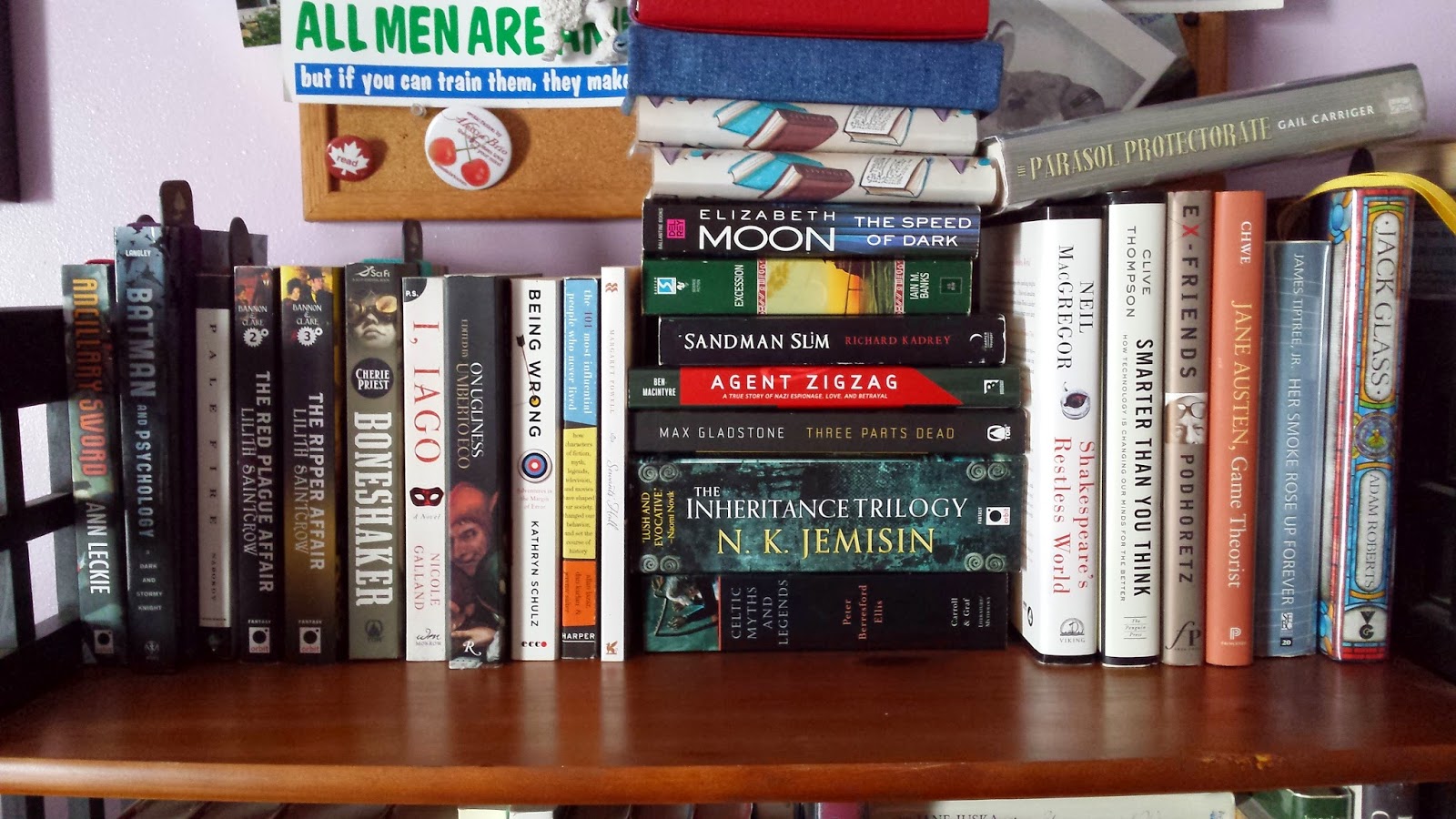 I'm still combing through my shelves and picking out books to read.  I found more Books with a Marker in them.  I am really _terrible_ about starting a book and then starting another book and then another book...yet not going back to finish!  So, to expand the list...

Batman and Psychology by Travis Langley.
The Name of the Wind by Patrick Rothfuss (the spider-thingies at the beginning just skeeved me right out)
Thin Air (Weather Warden books) by Rachel Caine
Small Favor (Dresden Files) by Jim Butcher (I really need to catch up on this series, and now enough books are out that I won't have to wait!)

And I found another book to add to the New Books list as well.
Jane Austen, Game Theorist by Michael Suk-Young Chwe
On Ugliness, edited by Umberto Eco

So, I may be curling up with a book tonight!

This wasn't a great year for reading -- at least, not for me to be reading.  I did a lot of listening because I am addicted to audiobooks now.  I was also not very good about recording my books, mostly because my current book journal requires a bit too much information for each book.  I have a new one now that requires a little less, so perhaps I will record a little more.

I did manage to read a little bit, and I have plans for next year.  Here are the lists.

Etiquette and Espionage: Finishing School Book 1 -- Gail Carriger
YA steampunk.  Audiobook. Fun, easy, entertaining, light. I haven't finished the series yet -- not quite so compelling as to make me anxious to see what happens next.

Below Stairs -- Margaret Powell
Memoir.  Interesting glimpse into the life of a domestic servant in early 20th century England.  For an Anglophile like me, it shows the underpinnings of so many dramas and romances.

God Save the Queen: The Immortal Empire book 1 -- Kate Locke
Steampunk:  I started this on audio but switched to print.  It's better in print for me.  Two more in the series I intend to read.  The humor is edgy, the adventure and mystery interesting, and it takes  a new (to me at least) approach to vampires, werewolves, and other paranormal critters.

Alex Veras novels -- Benedict Jacka
Fated
Cursed
Detective fantasy.  Audiobook.  In the style of The Dresden Files and a dozen others, this one also plays around with an interesting magic system and a less than all powerful protagonist.  I'm going through the series.  Lots of fun with alternate London.  I'm halfway through book 3.

Urban/Modern fantasy.  There isn't much else as cool as 2100 year old druid who talks to his dog -- who talks back.  Oh, and gods,  And vampires.  And witches.  And werewolves.  And snarky humor, tight action/fight scenes, and levels of character development to keep geeks like me talking for hours. It isn't often that someone plays with pantheons like this.  The story threads are laid in well, and items from the early books reappear so that what you think is either a loose thread or a settled issue gets all new and shiny later on.  I am engrossed. Book 8 can't show up soon enough, and I've also downloaded/bought the short stories to tide me other.

I both read this and listened to it (the audiobooks are pretty good).  In fact, I've listened to them at least 4 times now.

A Natural History of Dragons -- Marie Brennan
Historic Fantasy.  Although I wasn't exactly entranced with this book, I did enjoy most of it.  It is full of the tropes that I like best -- young woman who is "different" from her society's expectations, Victorian trappings, a touch of romance, and "science" with dragons.  I actually stopped reading the book for a while just a couple of chapters from the ending, because things were starting to get a little predictable, but I finished it up and I will probably get the next book (yes, it's a series.  Isn't everything anymore?)

False Colours - Georgette Heyer
Historical/Regency Romance.  Humorous Heyer.  I read it years ago and got it in audiobook this year.  Twin brothers create havoc when one disappears before his engagement is announced and the other takes his place to save everyone from embarrassment, only to fall in love with his brother's intended.

The Masqueraders -- Georgette Heyer
Historical Romance.  I read this one years and years ago.  I barely remembered it.   This is an early Heyer and features one of the best Magnificent Bastard characters I've run into.

Faro's Daughter -- Georgette Heyer
Historical Romance.  Audio book. This one is set in the pre-Regency era and features settings in the elegant gambling houses run by women.  Not my favorite Heyer and I have not read it before, but good enough, even if the female lead irritates me a bit.

Powder and Patch -- Georgette Heyer
Historical Romance.  Audio book.  Another early Heyer, set in the 18th century, with lots of delicious details about the "education" of a gentleman of the period.  I read it, too.

Ancillary Justice -- Anne Leckie
Science Fiction.  Easily the best book I read this year (despite my Iron Druid obsession).  Certainly the one that made me think the most.  If I start talking about it, I'll go on for pages.

Hard Magic: The Grimnoir Chronicles -- Larry Correia
Dieselpunk.  Audiobook.  I'm going to continue this series in print because it was just a bit too intense for me to be captive to someone else's reading pace.  Hardboiled, pulpy feeling with lots of darkness. Kept surprising me.

What Matters in Jane Austen -- John Mullan
Nonfiction.  Audiobook.  I'm all about Jane Austen and this book deals in some of the "questions" that readers have voiced about the novels.  If you aren't into Austen, it wouldn't be much fun, but I enjoyed it.  I'll probably listen to it again.

Lady of Devices -- Shelly Adina
YA Steampunk. Audiobook.  Part of a series that my husband enjoyed but that didn't thrill me very much.  Cute, but just not engaging.  Great title, though.

The Psychopath Test: A Journey Through the Madness Industry -- Jon Ronson
Nonfiction.

A Reader's Book of Days -- Tom Nissley
Nonfiction.  A book about books and things book related.  Lots of fun.

Books I've parked a marker in

Yeah, I haven't thought to post here for over a year.  I've talked plenty -- G+ and Ello are my favorite hangouts -- and so many times I've thought "Gee, I should just delete the damn thing." I hate leaving stuff lying around.

So, here's to 2015 and blogging again.  I will likely being changing the look of things and I'll be concentrating on books rather than my usual whining and cat pictures (I have social media for those).

Mostly, though, it was because, in the Christmas card Michael Guy sent me, he wrote at the bottom that he missed my blog.  This place, and earlier versions of it, did center my life for many, many years.  I met people, made friends, dealt with my shit, and had a pretty good time.